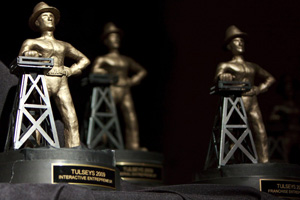 The historic Cain’s Ballroom played host to the 2009 Tulsey Awards Thursday night and provided a great venue for the roughly 500 in attendance.  The Tulsey’s are an outgrowth of the Mayor’s Entrepreneurial Spirit Award, a business-model competition that attracted more than 90 contestants.

The night capped off Tulsa Global Entrepreneurship Week.  The awards recognize the pioneers and innovators of the Tulsa community.  They are publicly driven and consist of 11 categories: Civic, Emerging, Entertainment, Franchise, Green, Interactive, Legend, Restaurateur, Serial, and Young.  There is also the Entrepreneur of the Year award given to the leading online vote getter of the event.  All nominees in each category were voted upon in online polls.

Local restaurants provided food that gave a nice variety of what Tulsa has to offer.  The audience range was young and old, from dressing to the nines to looking like you just walked in from the frisbee golf course.

The event kicked off with Mayor Kathy Taylor, taking to the podium to point out some of the accomplishments that have been made in Tulsa during her term.  The new Drillers Stadium, a new grocery store in north Tulsa and of course the Tulsey’s.

The award, a small version of the Golden Driller designed by Christopher Reegan, was handed out by local community leaders and dignitaries.  Some of the show stoppers were Judy Grove and Gavin Manes.  Grove, who proclaimed herself "The Baroness of Boobs" made a few off colour remarks that had a few in attendance a little red faced.  Bringing mention to the fact that the Golden Driller was 56 years old, "Do you know of any man in Tulsa that has been erect for 56 years?"  She and her co-presenter also mentioned that the Driller looked like a Ken doll (my words) and that they were launching the "re-packaging" of the Golden Driller campaign.  Manes, who was a presenter with Blake Ewing was a cut up and at one point went behind the large video screen and began doing some shadow dancing for the crowd.  It added to the campiness of the ceremony that had been set up to mimic the Academy Awards and the MTV Music Awards but fell a little short of that mark, except for the last award of the evening being interrupted by a louver shade glasses wearing Steve Cluck (ala Kanye West) stating that, "This award better be going to Beyonce’!"

Blake Ewing, the owner of Joe Momma’s Pizza, was the big winner of the evening and received the most votes, 1,200, and was named the 2009 Tulsey Entrepreneur of the Year as a result. He also won in the category for Restaurateur.

It was a great night for Tulsa businesses and showed the spirit of what our city really is all about, partnership.  Most winners gave recognition to Mayor Taylor for taking business leaders under her wing and allowing them to be showcased.  One winner made mention of adoration for Taylor and her accomplishments. "I didn’t vote for her, but I would now if she would have ran."

Winners of the night: